Who Can Afford It?

In The Mother Church Manual (Art. VIII, Sect. 14) our beloved Leader says, "It shall be the privilege and duty of every member, who can afford it, to subscribe for the periodicals which are the organs of this Church;" and in "The First Church of Christ, Scientist, and Miscellany" (p. 352) she says, "My desire is that every Christian Scientist, and as many others as possible, subscribe for and read our daily newspaper."

About eight years ago the writer, who at that time had been interested several years in Christian Science, and had received what to human sense seemed a wonderful healing, was subscribing for and reading The Christian Science Journal, Christian Science Sentinel, and The Christian Science Monitor. In addition to this, he was studying the Lesson-Sermon daily. At a church meeting held for the especial consideration of the circulation of our periodicals, he was awakened to the duty of subscribing for Der Herold, which he had not been taking, and which had been published but for a short period. Although unable to read German himself, an opportunity shortly afterwards presented itself to pass his copy on to an employee who understood very little English. After this man had finished reading the copy, he passed it along to a German family in the apartment house where he was living; and this family, in turn, passed it on to five other families, which resulted, ultimately, in six people subscribing for and reading Der Herold.

Send a comment to the editors
NEXT IN THIS ISSUE
Article
Thoughts: Their Nature and Effects 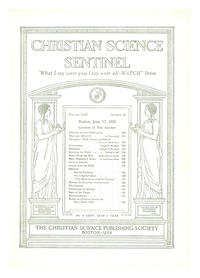