When I commenced the study of our textbook, "Science and Health with Key to the Scriptures"...

When I commenced the study of our textbook, "Science and Health with Key to the Scriptures" by Mrs. Eddy, I had a very imperfect concept of God and belonged to the class to whom Jesus referred as having eyes and seeing not and having ears and hearing not, but I was hungering and thirsting after righteousness and from the very outset witnessed the most wonderful demonstrations of healing and protection.

I had been studying the textbook a few weeks and had asked a practitioner for help, when one day I went down town and left my little son with my mother. She was sewing, and said that a crash brought her to the other side of the room to find that the child had pulled a large marble top stand over on himself. She said all she could see of the child was the top of his head. He was completely covered with the marble slab. She was so frightened she could hardly lift the table top off and expected to find him dreadfully hurt, but although she undressed him she could find nothing but a small scratch on his nose. This same child had been afflicted all his life with so-called extreme nervousness, and I had never been able to go from one room to another without taking him with me. About the second conversation I had with the practitioner I told her of this, and she very lovingly told me the truth about it. She said I should know that I never left him alone, as he was ever with our heavenly Father, and that the child did not depend on me. I resolved to be obedient and declare God the best I knew. From that moment a regeneration commenced in my consciousness and I found myself saying continually, "He belongs to God and He will care for him." A few days after this conversation with the practitioner I left him in the kitchen and went the full length of the house and upstairs without even thinking of him, something I had never been able to do before. When I reached the second floor it came to me what a wonderful thing had taken place. It was perhaps ten minutes before the child came tripping happily through the house, and I was never afraid again to leave him.

Send a comment to the editors
NEXT IN THIS ISSUE
Testimony of Healing
Christian Science has done more for me than I can ever... 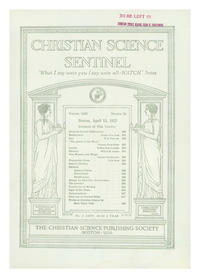