Every earnest student of Christian Science daily and hourly declares the omnipotence, omnipresence, and omniscience of the one Mind, and endeavors in every way to live consistently with and to prove the truth and power of this declaration. At times, however, the seeming evidence to the senses of a power in another so-called mind, or in minds many, opposed to good, so mesmerizes one that the struggle to maintain what has been proved of the truth becomes a veritable warfare, until the valiant soldier, wearied with the strife, is sometimes almost tempted to give up and lay down his arms; but hope, the bright gleam from heaven's eternal star, always penetrates the gloom and smoke of battle, and the steadfast one begins to glimpse through the continues study of Christian Science that all one has to lay down are the beliefs engendered by a false selfhood.

Diagnosed under the light thus gained, it is discerned that the only battle one has is with self. Evil, using the false weapons of self-will, selfish opinions, selfish desires, and the myriad sensual hopes and plans formulated by the senses, claims to build up a mystifying lie. In time it becomes so mesmerized through contemplation of its own handiwork as to fear and obey its mandates and to conceive its laws as superior to the false sense that pretends to have created them; as Paul said, "Know ye not, that to whom ye yield yourselves servants to obey, his servants ye are to whom ye obey; Whether of sin unto death, or of obedience unto righteousness?"

Send a comment to the editors
NEXT IN THIS ISSUE
Article
"In the spirit of Christ's charity,—as one who 'hopeth... 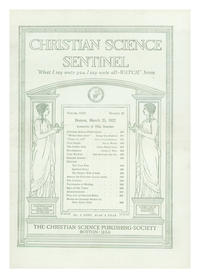