The first beams of Christian Science reached our family...

The first beams of Christian Science reached our family circle years ago, through a near relative. We gave this news little attention, knowing next to nothing about it, and thinking it to be merely a new healing method. It was in the fall of 1910 that we received some copies of Der Herold der Christian Science, and they were in a short time to help us out of great trouble and to be a beacon light to lead us to the truth. I was forced to acknowledge the words of Isaiah, "I girded thee, though thou hast not known me."

My sister had suffered for months from a severe nervous disease, which manifested itself in sleeplessness and intense pain in her limbs. At this time she became steadily worse, and many physicians who attended her predicted long invalidism, possibly paralysis. When at last she lay unconscious, and the physicians had for some time forbidden the use of any medicine, I grasped the opportunity, asked counsel of her daughters, and sought for Christian Science help. The way I found a practitioner in our town, where Christian Science is almost unknown, was a striking demonstration of God's care. The first words I whispered to the half conscious patient about God's infinite love, and of those who worked in love to lead her to her rightful heritage as God's child, impressed her deeply. The healing began at once and was glorious. The struggle with error was hard at times, but Truth asserted its power. Pains and unrest were stilled instantaneously, and at last she awoke to the full consciousness and joyous certitude that she had not left home, a sickly fancy which had troubled her for a long time. The years which have passed since have brought innumerable blessings, but hard trials also.

Send a comment to the editors
NEXT IN THIS ISSUE
Testimony of Healing
When I began to read "Science and Health with Key to the Scriptures"... 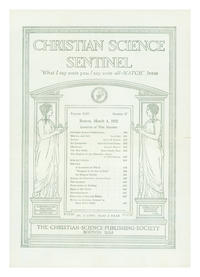