Before taking up the study of Christian Science, queries of this nature would frequently occur to me: What is the meaning of existence? Where does it lead, if indeed it leads anywhere but to annihilation? What is there that endures? What is the greatest good to be accomplished, and where does the way lie? What constitutes progress? It was all too evident that the great majority of mankind were striving for things that proved to be but baubles, things that, when won, brought no abiding joy, no peace,—in fact, too often the reverse.

Those who are not students of Christian Science sometimes regard with contempt the term "Science" when associated with the term "Christian," believing any and every religion to be a misstatement, since they hold any and every religion to be hypothetical and nonscientific. The dictum of to-day is, however, often reversed to-morrow by scholars. Medical science is an example of this. The remedies at one time prescribed for an ailment are often considered, at a later date, not only useless, but harmful. The ostensible object of medical science is to secure health to the people by preventing and curing disease; but after about four thousand years of so-called progress in this science, the last state appears to be much the same as the first. Einstein, an eminent natural scientist, is to-day propounding a theory whereby time and space are eliminated, both of which have hitherto been regarded and dealt with as realities by most people. 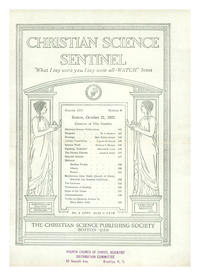