From time immemorial the human race has acknowledged, either consciously or unconsciously, the existence of some intelligence as compared with which it considered the human intellect to be nothing, and this acknowledgment has been a common feature of all shades of religious belief throughout history. Where these same religious beliefs have failed to achieve agreement, however, is in their efforts to ascertain the nature of that intelligence. Now the concept of such an intelligence as wholly evil would not be accepted, since fear would become the sole motive for right conduct under such a system of thinking, as it has proved to be in the past among certain primitive peoples until a better understanding arrived to alter the foundations of their beliefs. Even the Greeks and the Romans, materialistic as they may have been, held to no such view of the nature of intelligence, or God, but they, nevertheless, as many have done since, allowed in their calculations for the simultaneous existence of more than one supposed intelligence. So long as it was not claimed that either of these supposed intelligences was supreme, the theory was not so self-evident an absurdity as it appears to-day. When, however, in the course of human thought there was evolved a religious system based on the existence of an intelligence which was called supreme but which, it was supposed, either permitted itself to be thwarted by another intelligence not considered to be supreme, or permitted itself to think in a way that was manifestly unwise, even according to human standards, then the need for some new and consistent explanation of existence became very obvious,—as obvious as the recognition by thinking people that such theories contained within themselves no element of stability or progress.

At two points in the history of the world has its need in this respect been directly met and the only real foundation for clear thinking laid, by the revelation of intelligence as one limitless, omniscient, universal, eternal, omnipotent, divine Mind which is wholly good because it is God. The nature of this God, or Mind, is revealed in the Bible and in "Science and Health with Key to the Scriptures" by Mary Baker Eddy, the book which revealed the true significance of the Bible to the world.

Send a comment to the editors
NEXT IN THIS ISSUE
Article
"My son, give me thine heart" 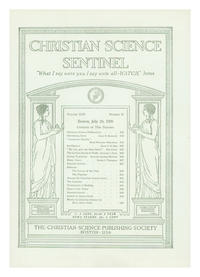