The writer once found an old atlas the purpose of which was to show the gradual discovery of what we now call the world. On the first page was a small plot of ground called the Garden of Eden; this was surrounded by water. The next page showed a larger tract of land, and so on, until two pages were needed to show the whole of the world's discoveries. To a Christian Scientist, with the first glimpse of the world of Spirit comes some of the joy of a discoverer where it is seen that though God's creation is finished, this creation is to be discovered only by taking the footsteps pointed out by Mrs. Eddy, whose tireless work revealed to her so much of the land which to others may seem very far off. Each demonstration of the fact of God as ever present and man in His image and likeness is an everlasting possession. Things that the world calls important fade away into nothingness when we rise high enough above the mist of materialism to see something of the allness of God, good, and the nothingness of evil. It is only when we allow thought to dwell on hardships and difficulties that the way seems toilsome. The true explorer is glad if his toil brings something to light that was unknown before. His enthusiasm is undaunted and his hope never flags. And so it is with the true Christian Scientist.

To the distributor of the Christian Science literature, each fresh place he finds where his gift is gladly accepted is a discovery. Each patient who is healed discovers something that was always there before, only awaiting the recognition of the practitioner and the receptivity of the patient. Each testimony of gratitude and praise reveals fresh glimpses of the light which was always shining out into the darkness and has at last been seen and acknowledged. Through the wisdom of our Leader churches are required to elect or reelect as their own officers not only those who have proved themselves fitted for their office, but they must also enlarge their borders and exercise a wider vision, a larger discernment of the fitness of their membership for office. Church building, which becomes necessary as the attendance grows, requires ever increasing effort and new discoveries. The lecturer is constantly discovering new regions where the gospel may be preached, as he hears the cry, "Come over . . . and help us." New fields for discovery are steadily being opened up to the Committees on Publication, and so on through all the varied activities of the Christian Science movement. 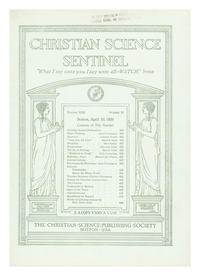