With much gratitude for the many good things I have...

With much gratitude for the many good things I have received through my study of Christian Science I send this testimony, hoping that it may help some one needing help as I was My first acquaintance with Christian Science was in 1909, when a sister urged me to have treatment for the discords that were then causing me much suffering. She asked a practitioner in Kansas City, Missouri, to treat me and in about three weeks I was healed. After that I never entirely quit reading the Science literature, but at times I read only in a half-hearted way. In 1916 we lost our little boy, and I became so filled with fear of losing the only remaining child that I was afraid to go to sleep and afraid to wake up. When she was showing every symptom of having a convulsion (she had already had three) I called a practitioner in a city about one hundred and fifty miles distant and asked her to treat the child. She lovingly responded and quieted my fears, and when I returned home from the telephone office, a distance of a block, my daughter was asleep in the nurse's arms. She gained rapidly and is now a strong, healthy girl. One Christmas eve she had the croup. It was too late to telephone for help, so at her request I read to her from the Bible. She rested well all night and in the morning the fever was gone and normal conditions were restored. She has never had the croup since.

I have never had the privilege of attending church, except one Wednesday evening meeting, and only on two brief occasions have I seen the practitioner that has helped me. At first I felt that I must be closer to help, but I have learned that God is with me as much as with the practitioner, and that thought has always given me courage when the way seemed dark. I could tell of many instances of very rapid healings, and of many ills that have appeared only to be overcome before others in the household had noticed the discord. I am very grateful to those who have enabled me to understand more of the truth, also to Mrs. Eddy for making it so plain to us in her writings.

Send a comment to the editors
NEXT IN THIS ISSUE
Testimony of Healing
Jesus said to his disciples, "When the Comforter is come,... 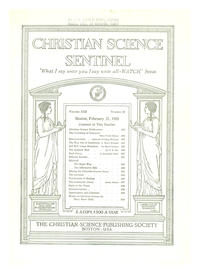