Christian Scientists understand that they are not the revelators of Christian Science; also that they are not its discoverers or its founders. Mrs. Eddy is the one to whom God gave the revelation of Christian Science, and there can there be but one Revelator, one Discoverer, one Founder, of it. Mrs. Eddy says in "Science and Health with Key to the Scriptures" (p. 174): "Truth is revealed. It needs only to be practised." Christian Scientists also understand that as they spend their time in demonstrating the truth they have already seen, rather than in praying for a larger vision, they will, without any doubt, progress rapidly. This will in no way limit the right of every one to look to God for direct inspiration. It is man's necessity to learn to rely on divine Mind for every thought. Jesus, however, measured his inspiration by the law and the prophets, which he said he came to fulfill. Mrs. Eddy in turn held the Bible as her textbook and weighed her conclusions by the lives of Jesus, the prophets, and the apostles. With such illustrious examples as these, no egotism should deceive one into imagining that there is something new left for him to discover so far as the fundamentals of Christian Science are concerned. It is the business of a Christian Scientist to measure whatever vision comes to him by the practical truth already revealed in the textbooks; then he will realize how little he has yet demonstrated of the rules given therein. Modesty thus learned will prevent him from being tempted into arrogantly presenting "something new" in the line of Christian Science.

Evil ever claims to be seeking whom it may deceive, and one of its most plausible arguments is tell one that he has walked so close to God—has prayed and worked and sought so earnestly—that a wonderful new light has come to him, some new sense of God which other Christian Scientists had not before known. Then he feels led to proclaim this vision to others. If he is really honest, if he really wants Truth, he will soon discover his mistake. If, however, he is not honest, he may go on apparently finding "itching ears" ready to listen, until the belief in the wonder of his supposed message shall have so blinded him to true humility that his fall, though delayed, will be the greater, and many others may have been so deceived as to participate in the same destruction. 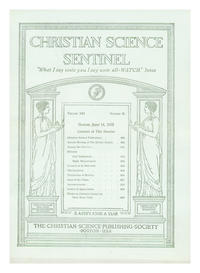