It has been said that the failure of Christianity to meet the needs of the human race is apparent to-day, but such a statement must include the assumption that Christianity in its history of nineteen centuries has received a fair and adequate trial. There are innumerable opinions as to what the term Christianity implies, as is shown by the numerous sects into which Christendom has become divided, a condition mainly brought about by the introduction of various doctrines, ritualism, and the literal interpretation of some of the Biblical allegories, which have beclouded the teachings of the master Christian to such a degree that quite one half of his statements have been rejected as being applicable only to the period in which he himself lived and not for all time.

Send a comment to the editors
NEXT IN THIS ISSUE
Testimony of Healing
I am sending this testimony of my thankfulness for God's... 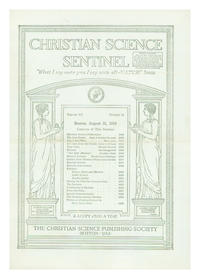