Deliverance from All Evil

For some sixteen hundred years since the time of the primitive church, Christendom has stood for the saving from sin only, and has considered sickness and death as phases of God's government. To indicate a radical change in Christian teaching and practice, we may say that this change dates from 324 A. D., when the Emperor Constantine formally accepted Christianity as the state religion of the Roman Empire. He endeavored to carry the Christian church into politics—a thing impossible of performance. He might have succeeded had he attempted the purification of politics, even as all thought must become purified and exalted under the influence of spiritual thinking, but with the attempt to use the church politically Christian healing was lost, and the centuries thereafter dragged on without the healing influence of spiritual understanding.

The Christian church has held fast to the theory that the grace of God through the understanding of Christ saves from sin. This was and is a solid foundation upon which to stand, because it is true and inspirational. Throughout the centuries Christian men and women have given influence and glory to their churches through toil, deprivation, and sacrifice, mindful of the Biblical promises of spiritual reward for the faithful. Upon the prayers and labors of saintly Christian has been reared the civilization of the world. Yet, though during the past sixteen hundred years the doctrine of salvation from sin has based the teaching and practice of the Christian church, and while such teaching has undoubtedly been a blessing to mankind, the world has not been delivered from sin. 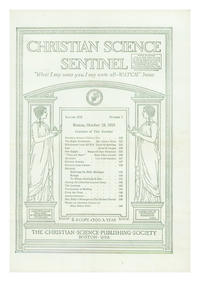