In an editorial entitled "Science and Health" (a caption...

In an editorial entitled "Science and Health" (a caption inspired no doubt by the famous volume of that name written by Mrs. Eddy), the Times stated that while it would not seem to be within the province of the state police power to compel medical treatment, it would seem to be within the police power to compel medical supervision in order to insure conditions favorable to the recovery of the sick. In reply thereto permit me to state that the world is fast working around to the point where it is willing to admit that every material effect has a mental cause. This applies to the human body and its ills as it does to errors in numbers. Mrs. Eddy saw this fifty years ago, when she discovered Christian Science. Writing of the human body in Science and Health she says, "A mortal man possesses this body, and he makes it harmonious or discordant according to the images of thought impressed upon it" (p. 208).

If disease is the objectification of mortal fears and beliefs, medical diagnosis and treatment, which deal with effects only, leave the cause wholly untouched. Thus the diseases of the human body which appear to be eradicated by powerful drugs or removed by the knife, are never really destroyed, because the fears and beliefs about them are undestroyed and therefore the diseases are liable to reappear at any moment. Christian Science, on the other hand, turns from effect to cause in order to bring about a cure. Instead of applying a drug or cutting away a portion of the body, it brings to the human mind (the seat of bodily discord) the understanding of the truth of being, which quiets fear and acts as a corrective, causing the human mind to think in terms of health instead of sickness. Christian Science teaches that mortals manifest harmony in their bodies in the proportion that they think rightly, and results prove that this teaching is demonstrably sound.

Send a comment to the editors
NEXT IN THIS ISSUE
Article
A critic is reported as saying that Mrs. Eddy did not... 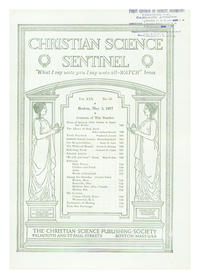