Christian Science in the Home

The value of Christian Science literature is that it spiritualizes and instructs its readers in a way no other literature could possibly do. The depth, vivacity, and charm of Mrs. Eddy's writings sets a high standard for Christian Scientists, both at home and abroad. In the Glossary of Science and Health (p. 582) Mrs. Eddy thus begins her definition of children: "The spiritual thoughts and representatives of Life, Truth, and Love." Children, then, spiritually understood, are not limited in intelligence, wisdom, obedience. Instead of worrying over the children and fearing for them, parents would be better employed in seeking to know them as God's ideas, manifesting divine qualities, cared for by divine wisdom. If the Father provides for His creation, as we are told, will He not feed and clothe the children? Most assuredly, if we eliminate from our own thought the pernicious beliefs about children and parenthood which, though ages old, are not true.

One of these beliefs is that children have inherited tendencies and qualities from their ancestors which must be overcome. If we want to help them, it would seem the better way to prove the unreality of various inherited manifestations and to know that the priority of mortal beliefs makes them neither real nor true. If they are no part of the real creation, they are not true now, and never were true; therefore they can have no real manifestation. Backwardness, forwardness, naughtiness, and laziness in children are only arguments of the serpent, or evil. They are no part of God's creation; therefore they should be denied and cast out. 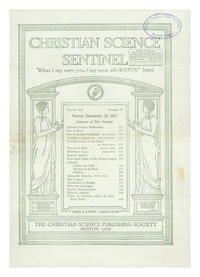