JESUS of Nazareth is generally accepted as the world's foremost religious instructor. He presented a more spiritual concept of God and man than did any of his predecessors, and he was more successful in demonstrating the truth of his doctrine. The application of his teachings was broad enough to convince the thoughtful person that the truth, as he presented it, is equal to every reasonable demand that can be made upon it. On page 315 of Science and Health Mrs. Eddy says that "Jesus was the mediator between Spirit and the flesh, between Truth and error." If his teachings are not scientifically understood, the purpose of his works is not fully comprehended, and there is a vague and indefinite belief as to how much he accomplished for the salvation of mankind. It is believed by some that he did all that is necessary, and it only remains for humanity to accept him as their Saviour. Others regard him as the Wayshower, the one who came to point the way and make it possible for men to work out their own salvation.

In his first epistle to Timothy Paul writes, "There is one God, and one mediator between God and men, the man Christ Jesus." These words of the apostle are variously interpreted, and the interpretation placed upon them by an individual very largely determines that individual's conception of the Master's life-work and the purpose of his mission. If it is believed that Jesus appeased the wrath of God and thereby affected a reconciliation between God and man,—and this is the view entertained by many,—it would seem that his work was that of an arbitrator rather than a mediator; but Paul declares that he was, or rather is, the "mediator between God and men." There is a vital difference between an arbitrator and a mediator, as the word is here used. 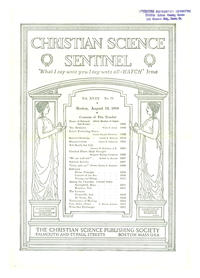