I am eager to express my gratitude for the many blessings...

I am eager to express my gratitude for the many blessings received through Christian Science in the past fifteen years, for it has sustained me through sickness, grief, and loss. When it was recommended to me as a healing system I refused to accept it, thinking it a very erroneous teaching. The "still small voice" had, however, awakened me, and I could not banish it from my thoughts, so finally I yielded; but it was merely because of a very sick body and an aching heart. I was a slave to physicians, to medicine, to fear, indeed to almost every ill to which mortal thought could be heir; was broken down physically and well-nigh mentally, a nervous wreck from fear of total blindness, a mortal sentence placed upon me by two well-known eye specialists as well as a nerve specialist. I was also in bondage to rheumatism and sleeplessness.

In my distress I cried out to God to show me the true way to live my life here, also to give me the strength to live it in patience and aright, and with this cry I fell asleep and slept peacefully until morning. The day following, a woman with whom I had a slight acquaintance placed a copy of Science and Health in my hand, telling me I could keep it for a few hours. I read the chapter on Prayer, and the wonderful illumination that came to me on reading it and the love awakened in my consciousness will never be forgotten. The book was loaned to me again on Thursday evening, when I was told to keep it overnight. I read it the greater part of the night, and a few days later called on a Christian Science practitioner for help. Within and hour I was so gently led to see God in all His goodness and perfection, with love toward His creation, that there was not a doubt of the healing power of His word left in my thought. I asked for treatment, at the same time removing my glasses, from which I had not been separated an hour for some years, excepting when they were broken, and then I suffered until they were returned to me. I have never put them on since that day, fifteen years ago, and I use my eyes in very close application to my work as a dressmaker and also read and write hours after nightfall.

Send a comment to the editors
NEXT IN THIS ISSUE
Testimony of Healing
For three years I have been enjoying splendid health and... 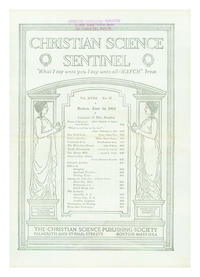