Christian Scientists do not refrain from the use of drugs...

Christian Scientists do not refrain from the use of drugs and serums because of any prejudice against employing a physician, but because they have found a more effective remedy; hence this and certain other inferences carried by statements made in the "Health" column of the evening edition of the Mail of May 22 need correction. The article in question is an exhortation to the public by the editor of the department to use antitoxin as a cure for diphtheria, and since he believes in the efficacy of this serum, he is warranted in recommending it, irrespective of whether his confidence is justified or not; but he is not warranted in stigmatizing as prejudice the convictions of others (and there are many thousands of them) who do not believe in the injection of a foreign substance, and particularly of a diseased substance, into the blood as a means of cure or prevention.

The statement that diphtheria serum is "a cure" for diphtheria is one which Christian Scientists do not care to dispute, but it would seem to be seriously challenged by the fact as reported by the Illinois board of health bulletins, that the deaths from diphtheria have nearly doubled in the nine years since the state began to distribute antitoxin. Christian Scientists are prepared to deny, however, that the only cure for diphtheria "consists in the early use of diphtheria antitoxin serum," for no disease is excluded from those which have been healed by Christian Science, and diphtheria is as susceptible of healing by the methods used by Jesus as are heart diseases, tuberculosis, paralysis, tumor, cancer, and the whole list of so-called incurable diseases which have yielded to Christian Science treatment after other treatment had failed.

Send a comment to the editors
NEXT IN THIS ISSUE
Article
In a recent Tribune there appeared a letter from Caption... 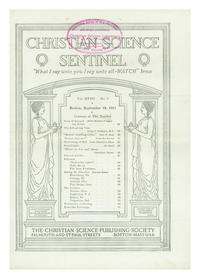