Mount Lassen, Cal., has become the subject of an informal cooperative study by the geological survey and the forest service. At the request of the survey, a telegram has been sent from Washington instructing the officers of the Lassen national forest, in which the peak stands, to continue observations of the volcano's activity and keep a record to be used as a basis for a scientific investigation by a government geologist, who is expected at Lassen early in July. The observations are being made by forest rangers at the scene and from a fire lookout tower on Brokeoff mountain, a few miles north of the crater, where the forest service last year kept watch on the numerous eruptions which occurred from May to September.

It is not known whether a cloudburst started the last eruption by precipitating rain upon the molten lava in the crater, or whether the melting snow on the peak, with consequent flowing of water into the crater, caused the accumulation of steam which blew a river of mud out of the mountain. The bright glow reported as appearing on the clouds of smoke and steam over the crater is a reflection of the red-hot matter uncovered by the eruption, indicating that the volcano is in a more or less dangerous mood. The river of mud which was shot out of the north side of the crater and down Hat creek, damaged government and private property, destroying bridges which were necessary to permit the entrance of live stock that are grazed on the forest range during the summer. Some twelve thousand cattle and thirty thousand sheep are grazed on the Lassen forest every year. Mount Lassen, inasmuch as it is the only active volcano in the United States proper, according to the geological survey, is regarded as exceptionally interesting, as from its location it is very accessible to observers, and from a scientific view-point presents much in the way of possibilities.

Send a comment to the editors
NEXT IN THIS ISSUE
Article
Christian Science: Its Truth and Value 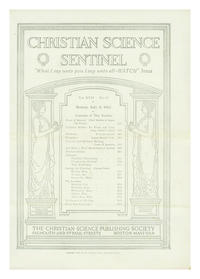