Although the Church Manual is addressed primarily to members of The Mother Church, and is of course mandatory only on those who are within its jurisdiction, it will be well for all who aspire to be Christian Scientists to give earnest heed to its prohibitions and to be guided by its loving counsels. The reason for this book is set forth in its Foreword by Mrs. Eddy as follows:—

"The rules and by-laws in the Manual of The First Church of Christ, Scientist, Boston, originated not in solemn conclave as in ancient Sanhedrim. They were not arbitrary opinions nor dictatorial demands, such as one person might impose on another. They were impelled by a power not one's own, were written at different dates, and as the occasion required. They sprang from necessity, the logic of events, —from the immediate demand for them as a help that must be supplied to maintain the dignity and defense of our cause; hence their simple, scientific basis, and detail so requisite to demonstrate genuine Christian Science, and which will do for the race what absolute doctrines destined for future generations might not accomplish." 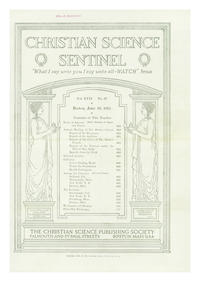