Journey of the Wise Men

The experiences which befell the wise men on their journey from the East to Jerusalem, as related in the second chapter of Matthew, is of special interest to Christian Scientists, since they too pass through strikingly similar experiences on their way from sense to Soul. The Orient, where the wise men abode, was then the seat of all material learning, whence it has spread over all the earth. It is of interest to note that the wise men turned away from all this learning and the splendor of material sense and achievement. They turned their backs upon it, as it were, and set out to find the Christidea, that which was to reflect to the world spiritual light, and lead on spiritual progress.

We are usually quite content with that which fully satisfies us, and no longer look about for something in its stead. Wise men indeed were they to realize that merely human learning and human possessions, no matter how wonderful, can never really satisfy. We too, as we start out in our search for the priceless realities of Spirit, must begin like them by turning away in our thought from a material sense of life; from a belief in its claim to be that which is true or powerful or satisfying. Having believed for so long in this material sense of life, which Christ Jesus designated as "darkness," our perception of Spirit, Truth, is at first very faint, merely a star-gleam, as it were, in our "night of error," as Mrs. Eddy calls it in that wonderful first paragraph of the Preface to Science and Health. As the wise men faithfully followed the faint gleam of spiritual light which had dawned upon their consciousness, it led them on, nearer and nearer to that which they had started out to find and which they so longed to reach, — to that spiritual attainment which alone satisfies. To material sense they beheld a little babe, but their spiritual perception, which had grown fuller and deeper as they obediently followed the leadings of Truth, recognized in him, as Mrs. Eddy goes on to explain, "the human herald" of the Christ, the "light of the world." 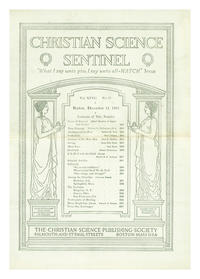