Now that the Rev. Mr.—has renewed his attack upon...

Now that the Rev. Mr.—has renewed his attack upon Christian Science through your columns, I trust that you will again permit me to answer by the same means. In my former letter I offered as a definition of substance, "that which is real, in distinction from that which is apparent." The critic's comment on this is indeed interesting. He takes issue with it as being "in perfect accord with Christian Science definitions. That is to say, it is wide of the mark." Perhaps I should have saved him from this mistake by citing the New International dictionary, from which the definition was taken. It is practically the same as can be found in school books, encyclopedias, and other standard works of reference; hence it expresses natural science or philosophy as much as it does Christian Science.

Send a comment to the editors
NEXT IN THIS ISSUE
Article
In a recent issue appears the report of a paper which... 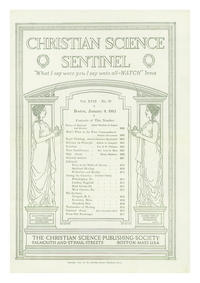