We often hear voiced by way of self-excuse, or to condone the shortcomings of a loved one, "I am not myself today;" or, "Do pardon him, he is not quite himself just now." Recently, when betrayed into such attempted self-justification, the writer was led to ask, When not myself, who am I? and What does being myself mean? Brief reflection led to the acknowledgment: I am not myself when I am manifesting any error, mental or physical. When I do this, I am surely "not the idea of God," and am "little else than the expression of error" (Science and Health, p. 289). Turning to the second question, the writer began earnestly to search for the true answer. The dictionary defined "myself" as "emphasizing ... normal condition of mind or body;" and further defined "yourself," the pronoun used by others in their kindly attempts to shield us from censure, as "you, in your own individuality." At first glance it was evident that it would be absurdly unnecessary to offer any excuse for being an individual, for being one's self, or for manifesting normality in mind or body; so another question arose,—What is individuality?

On page 336 of Science and Health we are told that "the spiritual man's consciousness and individuality are reflections of God." This explains that man in his true self is spiritual, and that individuality is true selfhood, which can never need excuse; so the plea for pardon on the grounds of not being one's self is but the unwitting attempt of mortal man to usurp an impossible place, since a mortal is not and can never manifest man's true selfhood. Again, on page 294, we read, "Man's genuine selfhood is recognizable only in what is good and true." By reason of the false belief that a mortal body is one's self, there is continued effort to excuse the faulty personality and to reclaim and reform the imperfect mortal,—an endeavor which must forever prove futile, since it is based upon erroneous premise and deals with transitory wrong instead of eternal right. 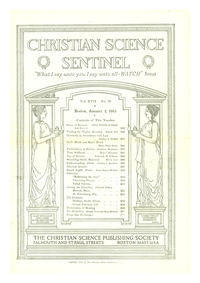