Not long ago I had occasion to go to a near-by city. The day was somewhat gloomy and the skies were overcast. As I took my seat in the train, my first thought was to turn to the window and push the shade well up, so that I might have an unobstructed view of the landscape,—not that I was expecting to make any special study of the latter, as it was already very familiar to me, but from an instinctive desire for light and for a broad outlook.

The matter which was taking me to the city seemed a somewhat complex one, and I realized that it was far wiser to study it in the light of truth rather than from a merely human, business point of view; so after settling down quietly I immediately began to work mentally over the problem before me. For a while all went well, and my spiritual vision seemed very clear. A sense of peace and quiet pervaded my mental atmosphere, and the way I was to go seemed to lie plainly before me. Minutes passed, and suddenly I became aware that a great change of feeling had taken place. A peculiar sadness appeared to be creeping over me, and a sense of darkness as well. I started, and turned to the window to find that very slowly, but none the less surely, the blinds had been slipping down and had now more than half concealed the outlook. I pushed them back into place, and this time made sure that they would stay. "There," I exclaimed, "is your lesson. Just as those blinds, which you were not watching, slipped slowly down and thus cut off the light of day, so a human sense of things has gradually crept into your mentality to darken your thought because you were not watching." 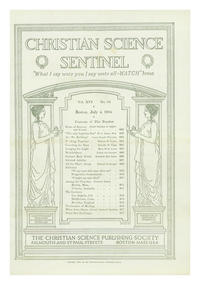