There is abundant evidence that the speaker is mistaken...

There is abundant evidence that the speaker is mistaken in his opinion that Christian Science is a product of the devil. There is Scriptural and much other authority for the assertion that an evil tree does not produce good fruit, and the fruit of Christian Science is invariably good. We do not know which of the many varying descriptions of the devil is accepted as genuine by our friend, but we have yet to hear the devil described as habitually engaged in making men and women better, physically, mentally, morally, and otherwise. Unless there be a devil who causes his adherents to give up sinful thoughts and practises, to obey the golden rule, to come out of various physical distresses and disorders, to be clearer and cleaner thinkers, better workers, and more upright, honest, sober, and industrious citizens; unless there be a devil devoted to the promotion of all the Christian virtues,—then there is no devil who could have originated Christian Science; for, depend on it, nothing that produces, encourages, or tolerates evil in any form is Christian Science.

Only those undertake to condemn Christian Science who judge it from a mistaken sense of what it teaches, rather than from an unbiased observation of the good it has wrought in the lives of its adherents. That is why all the criticism which has been hurled at it for a generation has not interfered with its steady growth throughout the world.

Send a comment to the editors
NEXT IN THIS ISSUE
Article
"A lecture on Christian Science, the first of a series on... 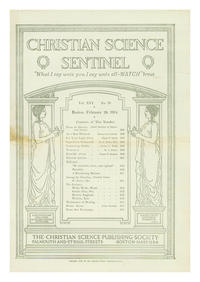