Those who before they became adherents of Christian Science were deeply immersed in what Mrs. Eddy speaks of as "erudite theology" (Science and Health, p. 24), find great enlightenment in the new aspect presented by once familiar passages from Scripture. One such passage is found in the fifth chapter of Paul's second epistle to the Corinthians, where we are told that God hath "given to us the ministry of reconciliation;" or, "committed unto us the word of reconciliation."

Exactly what does this mean? Perhaps one of the first things to come home to the thinker along new lines is this: that since all may be "kings and priests unto God," the need of an official priesthood is swept away in the broader perception of the fact that the duties of priesthood devolve equally upon all men. Now one of the demands upon those for whom "old things are passed away" is that he should endeavor to reconcile all men to God through Christ. In what way does he set about doing this? In one way only, namely, by so purging his own consciousness of false beliefs concerning man and his relation to God, that all those who come within the range of his thought are helped by it. To put it simply, we learn that every critical and condemnatory belief which we entertain concerning our fellow men is a disadvantage to our own progress into harmony, as it also is to theirs in so far as they are ignorant of their God-given ability to defend themselves from the mistaken thoughts (illusions) of others. 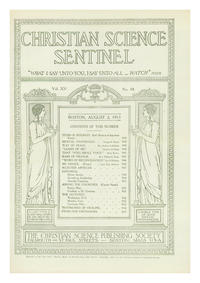