While meditating recently upon the familiar statement that as a man thinketh "so is he," a little occurrence of several years ago came into my mind, as if to help me to a better understanding of both the immediate and far-reaching import of the foregoing words. The occurrence in question had not been recalled to memory for a long time, though all the incidents are vividly remembered and now serve the good purpose of illustrating the truth of the words quoted.

After dinner one day, in a little southern city, several young men left their boarding-house in a group and walked in the street together until they came to a certain store, which one of them entered to make a small purchase, the others waiting for him on the sidewalk. As he disappeared in the store one of his companions observed a thermometer hanging at the side of the door, and after noting the temperature he blew his breath against the instrument, with the result that the mercury ran up in the tube from about 70 to near the 100 mark. When the young man came out of the store his attention was directed to the thermometer, and as soon as he saw the temperature as there registered he took off his hat and began to wipe the perspiration from his face, exclaiming as he did so, "It is getting hot!" His companions had a good laugh at the success of the experiment and his evident discomfiture, and then told him of the prank played on the thermometer in his absence. A look of chagrin passed over his countenance and, shrugging his shoulders, he said: "I feel all right now."

Send a comment to the editors
NEXT IN THIS ISSUE
Article
In the course of events, when critics had about exhausted... 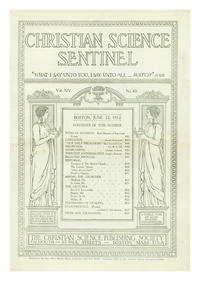