Tuesday night [Nov. 14] a large and representative audience of Berlin citizens was privileged to hear a most interesting lecture on a live topic of the day. The lecture, under the auspices of the local Christian Scientists, was given in the Gem Theater, and the address was by Frank H. Leonard. The speaker was introduced by Principal Fred S. Libby of the Berlin high school as follows:

Nearly two thousand years ago the shepherds and wise men came to Bethlehem to worship the child so humbly born there. This child grew in wisdom and brought to the world not a new God, but a new interpretation, a new conception of the God who is the same yesterday, today, and forever. At first his interpretation of God and God's teachings was not generally accepted. No great progressive movement has ever been inaugurated without opposition, and opposition always strengthens the truth; so Christ's doctrine survived the opposition of ignorance and superstition, and lived to revolutionize the world's civilization. Not even yet, however, has the human mind with its varying degrees of spirituality been able fully to agree upon the interpretation of Christ's teachings; hence the great number of different religious beliefs and creeds. Each new belief has established itself only after strenuous opposition and criticism by the existing order of things, and each form of religion exists today because it has something in it of good, something of truth that has benefited the world. 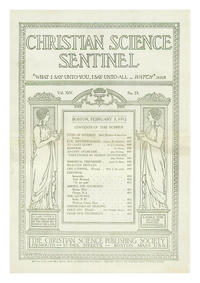