It often happens that a seemingly unimportant circumstance has made manifest an important truth, and such an occurrence came to my notice recently. A Christian Science student was sent to see a family who were very poor. They belonged to the class of people who are continually moving from place to place, and in this family was a little boy who had been normal until, when he was about five years old, he had an illness which resulted in what is known as epilepsy and idiocy, the child apparently being unable to hold any connected thought. It was an interesting case, and came under the care of a number of well-known physicians for several years, during which time two operations were performed on the boy's head; but they were not successful, and the other conditions remained apparently unchanged. The boy was put under Christian Science treatment when he was about ten years old, and when he began to awaken from this long dream he was still but a child of five in respect to intelligence. The healing, which was complete and permanent, was just an unfoldment of the intelligence which is a reflection of the one Mind, and in six months he was going to school like any normal boy of his age.

Prior to his healing the boy had usually sat in sullen silence during the visits made by the practitioner, and on one particular occasion, when she was talking to the father, trying to give him a gleam of light, the child abruptly said, "I know about God!" The practitioner turned to the child and said: "Well, what do you know about Him?" "He's up in heaven," replied the child. "Oh, no, He is not," said the Scientist, "God is right here, all around you." "Say that again," was the demand. The statement of God's everpresence was repeated several times at his request, and then came a long silence. The Scientist continued talking to the father, and when she was leaving, the child called out: "Say! I'm so glad that God has moved." This was the first intelligent remark made by the boy for many years (except to ask for food or water), and from this dawning realization of God's omnipresence the healing came quickly and naturally. 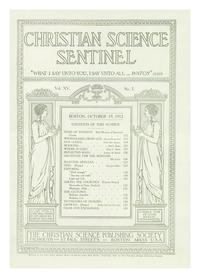