Christian Science has been before the people more than...

Christian Science has been before the people more than forty years. It has proved itself a positive boon to people in practically every community of any size in the United States, healing them of so-called incurable diseases and bringing them peace of mind and a sense of harmony and security to which they were strangers before. It is safe to say that this critic is ignorant of the work of Christian Science, or he would not make such false statements. In refuting his charge that Christian Science is irrational it may be pointed out that Christian Science has been studied, applied, and accepted by college professors, doctors, editors, ministers, lawyers, and others engaged in the learned professions, whose ability to follow a line of logical reasoning is doubtless quite as good as that of the one who condemns it.

Instead of looking to the human mind as a cure for disease, Christian Science points steadfastly to God as the healer of all of man's diseases. Jesus healed by the power of God. He persistently declared that of himself he could do nothing, that God was his source of inspiration, and this ought to be sufficient evidence that hypnotic suggestion as a healing agency is anti-Christian. The Bible warns men repeatedly against sorcery and necromancy, which were the forerunners of modern hypnotism or mesmerism, and Christians today should be alert to its evil character.

Send a comment to the editors
NEXT IN THIS ISSUE
Article
Whatever may be the legal status, or lack of it, of Christian Science... 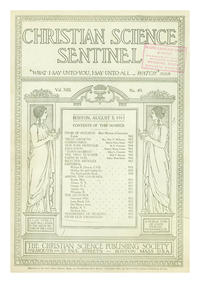