Underlying all activity there is a law of cause and effect. Students of biology trace all material phenomena to certain physical conditions or causes. A student of psychology explains that all physical activities result from varying mental conditions, while the student of Christian Science is learning more and more to recognize that one infallible law governs all things, whether it be apparent to human sense or not, and that this law proceeds from the one cause, God, and that it effects the boundless and unceasing activity of good. Mrs. Eddy has defined God to be divine Principle, and as such we know Him to be the only cause. Just as the basic law of mathematics when applied to a problem becomes related to its solution, so divine Principle is found to be causally related to the right solution of every human problem, and it brings things to pass, thereto, in a logical and orderly way. All this our Leader has explained to us so clearly in the chapter One Cause and Effect, in "Miscellaneous Writings," that any further statement would be mere repetition; but the following simple illustrations helped to illume, in one consciousness, the operation of this law of cause and effect.

A party of Christian Scientists were waiting their turn to purchase tickets for a concert. When the seats were reached it was found that owing to the crowd and confusion only two tickets had been received though four were paid for. The purchaser stepped back to the window, explained the mistake, and secured two more tickets, with the understanding that if at the close of the concert receipts showed a mistake to have been made, the money was to be refunded. Each friend realized clearly the operation of but one Mind and the impossibility of the existence of any error to claim power. After the concert the person who had purchased the tickets stepped to the window, and without a word the ticket-seller handed over the refund. In the discussion of this experience as an interesting evidence of the way in which Truth works, in contrast to past experiences under similar conditions, another experience was related which also showed that the nature of the cause always determines the nature of the effect. The lady who related her experience had for several mornings been overlooked by the conductor on her ride to school, and the temptation came to see just how often this might occur—the cheating of a corporation seeming to be a very harmless and impersonal act. In that week her accounts refused to balance, and the depleted purse started a search for cause. She looked into her own consciousness for the explanatory wrong thought, and determined to be entirely honest with the street-car company. As a result there was a return of normal financial conditions and she recognized the balance between doing right and having what is right. 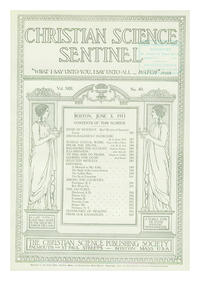