A resolve of the Massachusetts Senate provides that the Governor, with the advice and consent of the council, shall appoint a commission of seven citizens of the commonwealth, to consider in what manner Massachusetts may best cooperate with the federal government in the construction of a ship canal—free and open to the commerce of the world and without toll for the passage of freight across the state, as now being surveyed by the engineers of the war department. The canal would be a link of the proposed intracoastal waterway between Boston and Rio Grande in Texas, and in harmony with the plan advocated by the Atlantic Deeper Waterways Association. The commission shall consider how best the commonwealth may cooperate with other states along the Atlantic seaboard in the development of inland waterways, and shall consider the value of such a canal to the state in the development of industries, the reduction in the cost of handling raw material and manufactured products, and the benefit to transportation generally along the Atlantic coast.

Send a comment to the editors
NEXT IN THIS ISSUE
Article
HAS MAN A DUAL NATURE? 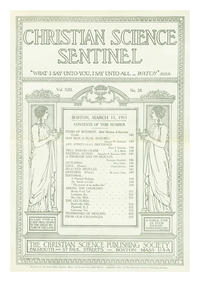