The writer and family are the only students of Christian Science in a small village, and we seldom meet other Scientists, except when business calls us away from home and we can sometimes go to a Christian Science service or a lecture. When I first began to read the literature, in order to overcome sickness, I wanted to be with Christian Scientists, and took much pains, whenever there were opportunities, to observe and converse with them. I think my purpose was to investigate the teaching, and I wanted to see what those who professed it were getting out of it, how it was transforming their lives and bringing out health and Christian character.

Although I found some good friends who were willing to help me in the way of treatment, instruction, and advice, I learned that I made less progress when I depended on personalities to help me than when I went directly to the text-book and was willing to work alone for the understanding of its truths. In looking to the human lives of some Christian Scientists I found they had much yet to overcome. I think I had idealized Scientists to the extent that I thought that after studying Science and Health they could not have the imperfections which others have. I expected too much, and was sometimes disappointed. I am now working for another spirit, that of love and charity, the charity which sees less of a brother's faults and looks beyond personality to God's perfect child, the spirit that sees all men as brothers who are willing to help each other to walk in the footsteps of Christ Jesus and work out their own salvation with the help of the Bible and their text-book.

Send a comment to the editors
NEXT IN THIS ISSUE
Article
"THE SYSTEMS FALL." 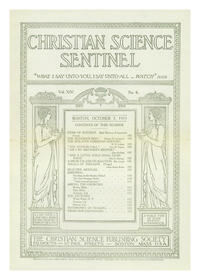