THE UNREALITY OF EVIL

Probably no part of Mrs. Eddy's teachings has given rise to so much opposition and contention as her deduction of the unreality of evil. Every form of contumely of which mortals could conceive has been hurled against this statement. And yet Christian Science asks no more of human credence than is demanded by any branch of socalled natural science. In beginning the study of any subject the student is asked to accept certain statements or axioms as truths, which at first may not be thoroughly understood nor their reason perceived. As he progresses, however, and finds that from these axioms other rules are formulated or deduced which, when applied, correctly solve complicated and obscure problems beyond all question of doubt or dispute, the student's only possible conclusion is the absolute truth of these axioms. 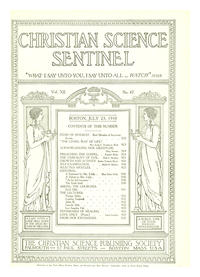