THE CHURCH OF CHRIST, SCIENTIST

It is very desirable that all who join the Church of Christ, Scientist, whether it be The Mother Church or one of its branches, should be thoroughly familiar with the object for which this church was founded, as set forth in the "Historical Sketch" in the Manual namely, "To organize a church designed to commemorate the word and works of our Master, which should reinstate primitive Christianity and its lost element of healing" (p. 17). The precise purpose for which the Christian Science Church was formed, and which is here so definitely stated, should be ever uppermost in the thought of the members of The Mother Church and of the branch churches. The nature of the church, as it is understood in Christian Science, is further defined by Mrs. Eddy in Science and Health, (p. 583), as "that institution, which affords proof of its utility and is found elevating the race, rousing the dormant understanding from material beliefs to the apprehension of spiritual ideas and the demonstration of divine Science, thereby casting out devils, or error, and healing the sick."

The foregoing brief quotations from our Church Manual and our text-book should be enough to remind us that we, as members of the Christian Science church, are identified with the most important religious movement since the early Christian era, and are engaged in the most splendid undertaking in which it can possibly be our privilege to participate. Having once fully realized this fact, we should not lack inspiration for faithful, persistent, consecrated activity. We should be able to see that in the work of Christian Science there can be no idleness, apathy, self-ease, self-complacency, or any other form of selfishness which might creep in and delay if possible the coming of Christ's kingdom to individual and universal humanity. We should understand that in the institution which "is found elevating the race" there can be no place for personal ambition, self-seeking, love of leadership, or desire to control, dominate, and manage the affairs of others. 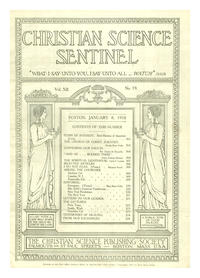