One of the most common objections made to Christian Science...

One of the most common objections made to Christian Science is, that it cannot be a spiritual system because it is so largely concerned with the healing of the body. But it is remarkable that when the disciples of John the Baptist came to ask Jesus if he really were the Christ, he did not refer them to the spirituality of his teaching or of his way of living. but to the fact that the sick were healed, "confident," as Mrs. Eddy says, "that this exhibition of the divine power to heal would fully answer the question" (Science and Health, p. 132). Christian Science deduces from this incident the fact that true spirituality should have a healing effect, and the honest student of Christian Science makes the proving of this fact an essential part of his practice, thus establishing a most stringent test of his spirituality, in that he is thereby called upon to prove his faith by his works.

Again, a very common belief regarding spirituality is that it should entail some kind of asceticism. The hollow cheek, the deep-set eye, the careless dress, the abstraction from ordinary matters, are all indications in the popular mind of what it vaguely thinks is spirituality. No one could be farther removed from asceticism of any kind, one would think, than the Founder of Christianity, who went in and out among the people, rich and poor, attended their weddings and their feasts, and shared their common daily life, yet gave out such a tremendous spiritual power that the demons cried out at his approach. These two points will sufficiently indicate that Christian Science regards spirituality as being entirely removed from the sphere of the emotions, of sentiment or of asceticism, but as being such an all-pervading, animating force in consciousness that it governs every thought, and therefore every detail, every trifle, in daily experience, in sickness as in health.

Send a comment to the editors
NEXT IN THIS ISSUE
Article
It should be noted that the majority of those who turn... 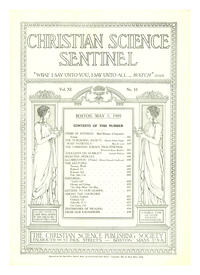