The first aspect of the subject which whetted my curiosity...

[Captain Geoffrey Wilkinson, who contributes the article on Christian Science to our issue of to-day, is the son of the late Colonel Wilkinson, of the Bengal Staff Corps. He passed into Woolwich nine years ago, and obtained his commission in the Royal Engineers. He first came in contact with Christian Scientists while serving at Peshawa, on the Afghan frontier. On his return to England he passed for the Staff College, but a year later he resigned his commission to devote his entire time to Christian Science.—Editor Onlooker.]

Send a comment to the editors
NEXT IN THIS ISSUE
Article
Christian Science, as a form of religious belief, stands... 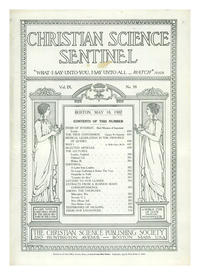