THE RIGHT SENSE OF HEALTH

For the healing of the "world-pain" which poets have deplored and material scientists have vainly sought to assuage, there has come through Christian Science a realization of the "saving health" which is the gift of God. This divine bestowal is so thoroughly chastening the human sense of health that all men must at length come to understand how unavailing are efforts to establish permanent ease and well-being in a material body. The prevalent definition of health as a state of painless adjustment and functioning of the physical organs must give way to the broad and true concept of a condition in which one is not only unconscious of bodily disease, but finds himself rightly adjusted mentally to his environment and his work, in harmony with his fellow-men and with God. That the sense of merely physical ease does not cause or condition mental and moral health is abundantly attested by the stolidity, the mental indolence, and the frivolous and selfish tendencies that may be manifested by those whose bodily condition is normal. Furthermore this material sense of health is not only limited, but capable of being destroyed, and it is thus proved to have no existence as an eternal verity.

Are we not justified, then, in hoping for and seeking freedom from fleshly ills? Must we be resigned to the dominion of disease, while we content ourselves with half-hearted efforts to cultivate spirituality? To these questions the Science of Christianity responds with demonstration of the fact that the true healing, effected through the right understanding of God and of man's relation to his heavenly Father, necessarily involves the destruction of every sense of physical disorder. It is not that God, when besought by a suppliant, exerts a mysterious influence which operates materially to destroy disease. The simple fact is that the Word of God, intelligently declared, overcomes the false belief of a discordant mortal, living in matter and subject to material law, with the true concept of man as wholly spiritual and governed only by spiritual law. Thus is made manifest the truthfulness of the statement in our text-book, "Body cannot be saved except through Mind" (Science and Health, p. 98); and the process by which health is secured is thus found to consist in seeking first the kingdom of God, and in entering into that spiritual harmony which is the only sure refuge from material suffering. 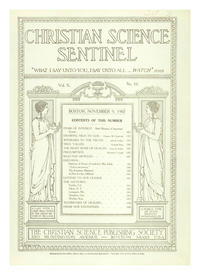