About two years ago Christian Science was brought to...

About two years ago Christian Science was brought to my notice, and after reading some Sentinels, I purchased a copy of Science and Health and began reading it at every opportunity which I could find, but being a traveling man my time was pretty well occupied. At first this book man my time was pretty well occupied. At first this book seemed very difficult to understand, but the more I read the brighter grew the way, and the Bible, which had been little understood, and seemingly full of contradictions, became a new book to me. While traveling in Arkansas I visited a Christian Science church at Little Rock, for the first time, and was very much impressed with the services and the welcome I received. The next day I purchased a Bible to carry in my grip, that I might learn more of both the Bible and Science and Health, for the two are inseparable. I had been a member of an orthodox church, but the Bible had only been read as a matter of duty; while it is now becoming a pleasure to read it. Inside of six months I was healed of a serious ailment of nearly two years' standing. Last spring. while moving our piano, I sprained my side, and it seemed to grow worse for several days, until I felt I must have help, and telephoned to a practitioner. I kept on at work, moving and lifting, yet in three hours I discovered that all trace of my lameness and soreness had disappeared, and it did not return.

During last winter I came home and found our little girl, nine years old, with a very high fever. With my little understanding I did the best I knew how for her, and in half an hour she was quietly sleeping and was free the next day. Recently I was overcome with chills, fever, and night sweats. After twenty-four hours my own efforts failed to give relief, so I wrote to a practitioner for help, and after she received my letter all these disappeared.

Send a comment to the editors
NEXT IN THIS ISSUE
Testimony of Healing
During last August, after some three weeks of intense... 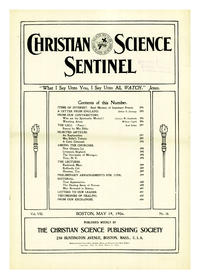