The Corner-stone of the new auditorium for the Mother Church in Boston was laid Saturday, July 16, at eight o'clock in the forenoon, and those who participated in this "simple, prayerful, devout" service, were much gratified that, in the orderly progress of the work, this ceremony became possible upon the birthday of Mrs. Eddy. In addition to the members of the Christian Science Board of Directors, who have the work directly in charge, there were present on this occasion, Mr. Alfred Farlow, President of the Mother Church; Prof. Hermann S. Hering, First Reader; Mrs. Ella E. Williams, Second Reader, and Mr. Charles Brigham and Mr. E. Noyes Whitcomb, respectively the architect and the builder of the new edifice.

The order of the services, which were conducted by the First Reader, was as follows:— 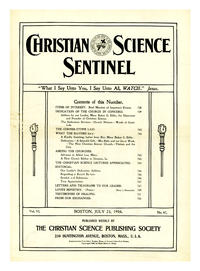