The Communion and Annual Meeting

In its attendance, its reverential spirit, and its manifestations of love, the Annual Meeting of 1903 surely takes rank above all its predecessors. The weather was simply ideal and the provisions for the comfort and convenience of the thronging multitude were so ample, so well organized, and so quietly and systematically carried out that the highest degree of satisfaction seems to have been secured to all. The remembrance of this fact will bring the general management and local members an especial joy. They know that the task was made relatively easy by the unselfish patience, the unfailing good nature, and the modest requirements of the dear friends who came to us from so many lands, and yet they cannot forget their indebtedness to that loving and alert brother whose all-round efficiency did so much to put their good purposes into tangible expression.

As usual, the friends from the more distant fields arrived first. Representatives from Melbourne, Sydney, and other points in far Australia were some days in advance of the host. Next Italy, Germany, the Northwest Provinces, and California were heard from, and then came the English delegation, led valiantly "through the paths of the sea" by the Earl of Dunmore and Judge Ewing. At the Wednesday evening service the Mother Church was crowded to its utmost capacity, and many grateful and appealing testimonies were given of physical and spiritual redemption through Truth as revealed in Christian Science. On Thursday and Friday the armies of the South, the great central West, and the Eastern Provinces arrived, and at sight of this "great company," whom no man has yet numbered, Boston capitulated and opened wide her gates. Many thanks are due the railroads, both for special rates, and for special efforts to accommodate the multitude, and to the press for its uniformly kind interest and excellent reports, from which we would be glad, were it possible, to publish larger extracts. 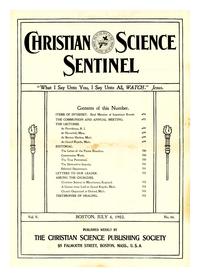