In a late address before the Homœopathic Medical Society of Chicago, Dr. Arthur G. Sax has made some declarations which bear directly upon the contention of Christian Science respecting the causal relation of given states of mentality to bodily conditions. He is reported to have said that anger and fright lead to the secretion of poison in man, no less surely than in a reptile; the latter, however, has an advantage in the fact that he can store up his deadly venom and so remains uninjured, while man inevitably poisons himself with the product of his desire to injure another. The doctor has thus called attention to a mortal law which has a very comprehensive range of influence in human affairs, and with this professional testimony there has come to us another illustration of its dominion, which has an entirely different setting.

A correspondent in Mexico City writes:- 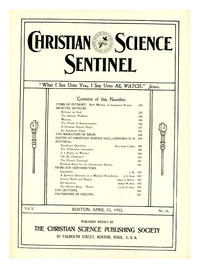