The Higher Ministry of Christian Science

The generous commendation bestowed on Christian Science by "Reasoner," in a late issue of the Examiner, and the willingness on his part to recognize the vast amount of good which has resulted from the practice of this teaching, speaks well for his fairness. His deductions, however, based on several of Jesus' sayings, and also made from the writings of Paul and Luke, should not be allowed to stand unquestioned. In comparing the needs of the present day with the needs of humanity in Jesus' time, we find that practically the same conditions exist now as then, and we are, therefore, justified in taking the words and works of our Master literally as our guide in dealing with these conditions. In doing this we should be careful to discriminate between the acts and words of Jesus and the significance which has since been bestowed upon them by traditional teaching. Jesus plainly said to all who desired to follow him: "Heal the sick." He was, if anything, more insistent upon this than upon its correlated command: "Preach the gospel;" mainly because, as he repeatedly said, "By their fruits ye shall know them." By example, also, he dwelt more upon works than words. The four gospels abound with the recital of his many good works, whereas but one sermon is recorded.

It is true that Jesus said, "They that be whole need not a physician, but they that are sick," and yet is not Jesus himself known as the great physician? Does the term "physician" necessarily imply the use of drugs? Luke was referred to as the "beloved physician," and yet there is no record of his having used any material remedies in his ministrations to the sick after accepting the teaching of the Nazarene Prophet. The effort to prove materia medica to be a part of the teaching and practice of Prophets and Apostles must ever prove abortive, for the reason that the spiritual and material are antipodes and can never coalesce. It does not follow, however, that those whose understanding of Spirit, or God, enables them to obtain relief for themselves and others through prayer alone should denounce the use of the material by those who possess no such understanding. As our critic points out, Jesus never withheld material remedies from those who looked to them for relief, and neither do Christian Scientists. That there is a better way than the material for alleviating the ills of our race, no true Christian can doubt. There is a law of love, however, which requires each of us to afford our neighbor the full benefit of whatever plan he chooses in his effort to rid himself of suffering, and we should never thrust our views upon him. It is for this reason that Christian Scientists are careful not to impose their belief on others. 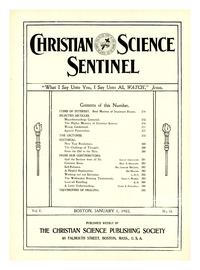