Judge William G. Ewing of Chicago, of the Christian Science Board of Lectureship of the Mother Church, Boston, lectured on Sunday afternoon, February 16, before an audience that filled Metropolitan Hall. He was introduced by the Hon. Frank H. Gould, former Speaker of the Assembly of California and now a prominent lawyer in this city, in the following words:—

Ladies and Gentlemen:—I have been requested to introduce to you to-day some one with whom you are doubtless far more familiar, most of you, than I am myself. While I cannot say that I am a disbeliever in the doctrine that he teaches, I think that the feeling I have comes nearer, probably, to non-belief than anything else—neither a believer nor a disbeliever, but one who is willing to learn. 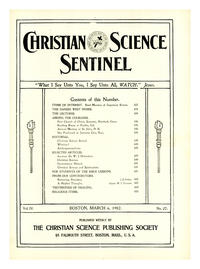