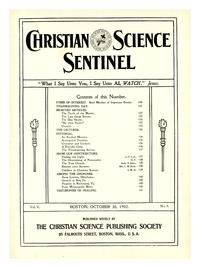 The Agricultural Department is to have a model farm situated just across the Potomac.
Article

The Truth of the Matter

To the Editor.
Article

THE writer of the following article does not adequately represent the teaching of Christian Science, but his apprehension is far in advance of religious thought in general and is specially interesting as an earnest of things to come.
Article

NOTHING short of understanding faith in God, is capable of reforming the sinner, healing the sick, and ultimately overcoming all error on a natural, commonsense.
Article

THE strength of Christian Science lies in its practical results.
Article

A RETROSPECTIVE view of religious history, the large number of different denominations, all professing to follow Christ, the struggle each had coming into existence, and when once in power the lack of tolerance each had for the other, wielding the lash of persecution with the cry of "heresy," against the new ones who stepped aside from the long cherished and beaten paths of the forefathers; the envy, strife, and jealousy that has arisen on doctrinal points between professed Christians disrupting the brotherhood of mankind, all show the need of Charity.
Poem

A sower sowed his seed, with doubts and fears;"I dare not hope," he said, "for fruitful ears; Poor hath the harvest been in other years.
Article

When I see the superstitions which the world's religion...

When I see the superstitions which the world's religion has fastened on the conscience, the spiritual terrors with which it has haunted and subdued the ignorant and susceptible, the dark, appalling views of God which it has spread far and wide, the dread of inquiry which it has struck into superior understanding, and the servility of spirit which it has made to pass for piety—when I see all this, the fire, the scaffold, and the outward inquisition, terrible as they are, seem to me inferior evils.
Article

Every seat of the large auditorium of First Church of Christ, Scientist, was occupied last night [October 7].
Article

As Christian Scientists we hold a peculiarly sacred relation to our fellows, and it has been truly said that ours is an holy calling.
Editorial

WHEN we learn that the present moment is the only moment, and that this moment's demonstration is the whole demonstration, we shall have come into possession of our whole inheritance.
Editorial

A WRITER has recently well said that the weight of one's character must be about a hundred times that of his word, in order to make his appeal effective.
Editorial

THE writer of the following editorial excerpts in the Newburg, N.
Editorial

WE are confident that all Christian Scientists will rejoice in the inauguration of a uniform Thanksgiving Day service which has been prepared at the request of our Leader.
Editorial

We have received numerous requests for the publication...

with contributions from Joseph Joubert

We have received numerous requests for the publication in advance of the dates upon which lectures will be delivered by the members of the Board of Lectureship, but it does not seem practicable to comply with such requests.
Article

WE are privileged to use the following self-explanatory communication from a Baptist minister to Christian Science friends:—
Article

The Overcoming of Personality

To many of us there has come the thought that certain personalities precipitate errors for us, and so hinder our progress in solving life's problem.
Article

FEELING sometimes almost discouraged over the manifold subtle attacks of error, as well as the more open and aggressive ones, the questions arise: Am I growing in the understanding and progressing in the spirit of Truth?
Article

SINCE Christian Science became the motive power in my own life, its work for the children has seemed to me specially important on account of its far-reaching influence in the home, and also because of the unconscious power with which the child-thought touches all with whom it comes in contact.
Article

It is necessary that religion should be held and professed...

It is necessary that religion should be held and professed in a liberal spirit.
Article

It is with joy and rejoicing for blessings received, that we send greetings to the Field.
Testimony of Healing

A little over a year ago I was persuaded to try Christian Science...

A little over a year ago I was persuaded to try Christian Science.
Testimony of Healing

Six years ago I was a despondent, melancholic, unhappy...

Six years ago I was a despondent, melancholic, unhappy invalid, a victim of inherited stomach trouble.
Testimony of Healing

Fourteen years ago, I was a total wreck, given up by...

Fourteen years ago, I was a total wreck, given up by my physicians, and sent home to die.
Testimony of Healing

I should like to send to our dear Sentinel one of my...

I should like to send to our dear Sentinel one of my earliest demonstrations in Christian Science.
Testimony of Healing

Eleven years ago, I was afflicted with a difficulty that...

Eleven years ago, I was afflicted with a difficulty that physicians could not name.
Testimony of Healing

I attended my sick mother for nearly two years, when I...

I attended my sick mother for nearly two years, when I was attacked with paralysis, having two strokes about six months apart.
Article

"Science and Health with Key to the Scriptures," printed from new plates, with lines numbered, and with important revisions by the author.
Article

Christian life, so far as it is genuine, is a manifestation of God.
Article