IN the early part of the sixteenth century the old master, the great sculptor, Michael Angelo, under the potent influence and inspiration of Savonarola, became deeply imbued with an artistic and religious fervor. He accepted an abandoned block of marble to model his world-wide famous David, now adorning a salon in the Academy of Fine Arts in Florence.

The artist saw within this rude, irregular mass of stone an image of David triumphant in his contest with Goliath. This champion of the Philistines had defied the armies of Israel, and said, "Give me a man, that we may fight together." David replied to the philistines, "Thou comest to me with a sword, and with a spear, and with a shield: but I come to thee in the name of the Lord of hosts. The God of the armies of Israel, whom thou hast defied." 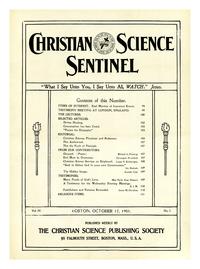