Editor American:—I would like to inform the public of an error of statement made by Mr. Riddell in his attack upon Christian Science.

He said he had within the last six months visited at Mrs. Eddy's home for a day and a half with Mrs. Eddy's private secretary. He said he could not think of his name. He never met Mrs. Eddy's secretary, and was never at her home as stated, as can be proven by a message received from that gentleman to-day. 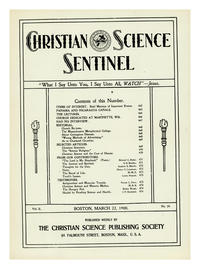