The fourth week of the court-martial trial of Captain Dreyfus was begun August 28. Charavay, the chief handwriting expert, created a sensation by declaring he had changed his opinion since 1894, and was now fully convinced that the bordereau was written by Esterhazy. M. Bernard proved an excellent witness for the defence. He at first believed Dreyfus was guilty, but now believes he is innocent. He told in detail how his conversion was brought about. The governor of the prisons said he thinks Dreyfus is innocent, and tells of his good conduct. Dreyfus told how he had determined to commit suicide on the day before his degradation, but was prevented by his wife, who told him that he owed it to her and their children to do his duty as a soldier and submit to the decree of the court-martial. Dreyfus seems to gain physically as his case prospers.

General Jiminez, who aspires to the presidency of San Domingo, was placed under arrest the second time at Santiago de Cuba by the order of General Wood, the military governor of the island, but was released on condition that he would leave Santiago without taking any arms with him. He has issued a proclamation as President-elect of San Domingo, setting forth his intention to establish a government similar to that of the United States. 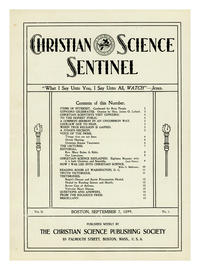