Because we are the image of God, Spirit, our true nature is actually like God—spiritual, eternal, and ageless.

As a noted filmmaker, still working in his ninth decade, was being interviewed about current and upcoming projects, he mentioned a conversation he’d had with a friend regarding what was “the secret in life.” His answer was simply, “Never let the old man in.”

This reminds me of counsel from the Bible’s book of Colossians: “Lie not one to another, seeing that ye have put off the old man with his deeds; and have put on the new man, which is renewed in knowledge after the image of him that created him” (3:9, 10). 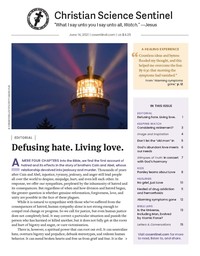