Healing of sores on feet

While at a workplace that required more standing and walking than sitting, I began to notice sores on the bottom of both of my feet. About the same time, I felt that a colleague had been causing me quite a lot of unnecessary difficulty. After a couple of years the sores were still there, and the difficulty between my colleague and me remained.

One night, realizing that my prayers had not been effective, and still desiring healing, I was listening to an audiotape of a Christian Science radio program. A woman told of how her daughter had rebelled and gone the way of the world, leaving home at an early age. This mother had prayed and prayed, much as I had with my difficulties, but to no avail. She was at a Wednesday night testimony meeting at her branch Church of Christ, Scientist, and a trusted friend was sitting next to her. The mother asked this friend if she could talk with her after the meeting. The friend, of course, consented. The mother poured out her woe to the friend and asked if she knew of anything that she could do. The friend listened quietly, and then said that the mother needed to forgive her daughter. The mother said that she had forgiven her! The friend asked her to just think about this some more. 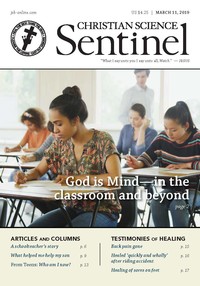