On a mild autumn evening, as I walk down 12th Street toward Catharine Street in South Philadelphia (called “Philly” by the locals), I hear laughter in the streets. Gathered together on porch steps, friends and families enjoy the breeze. Nearby, at the elementary school, Hispanic and African American kids play while parents sit nearby. Tonight it’s easy to agree with a recent Harris poll that of the top ten major American cities, Philadelphia, Pennsylvania, is the third happiest city in the United States.

Besides Philadelphia, the survey mentioned Dallas-Fort Worth and Houston in Texas, and Atlanta, Georgia, as the top four in terms of overall happiness. All the cities were surveyed with reference to family, spiritual values, and health. I was intrigued when I read that those surveyed in Dallas/Fort Worth are “among the Americans most likely to say their spiritual beliefs are a positive guiding force to them (75%).” Then I found another poll, this one by the Barna Research Group. Its research lists these four cities as the most Bible reading of the ten major cities on the Harris Poll list.

Shelly Richardson is a Christian Science practitioner who divides her time between Philadelphia, Pennsylvania, and Eugene, Oregon. 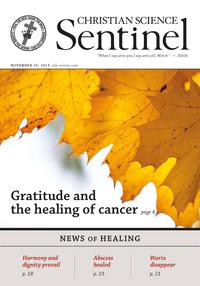