Marjorie and the Dream

When I was very young, my mother used to read to me from an eight-volume series called Marjorie and the Dream by Katherine M. Yates.

My favorite in the series was titled On the Way There, recommended by Mary Baker Eddy (see Sentinel, August 27, 1904). It was a story about a somewhat willful little girl named Marjorie, and her contemptuous nightly companion, the Dream, an elf-like figure who sat on the footboard of her bed and taunted her when she was trying to go to sleep. Eventually the Dream agrees to take Marjorie to a nice place, but warns her it isn’t so nice on the way there.

Phyllis W. Zeno is the publisher/editor of Beach Talk Magazine. She splits her time between Florida and New York City. 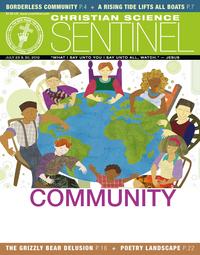